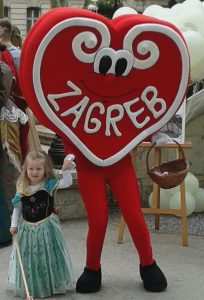 Last year I broke one of my own cardinal travel rules: I flew on two separate tickets to one final destination. After a short visit back in the States, I had one ticket to London and another from London to Zagreb. I had finalized my plans in two stages, and that’s just how the ticketing worked out in the end. I wasn’t really comfortable wth the situation, knowing that if I missed my connection I would have no recourse and no sympathy from the airlines. However, I told myself that a four-and-a-half layover was a comfortable cushion for making my connection. I even double-checked the terminals at Heathrow that I would be using, to make sure I wouldn’t have too far to go. I finally decided that everything was going to be just fine.

Well, it wasn’t. Due to a mechanical problem, my flight from Chicago to London was – you guessed it – exactly four-and-a-half hours late. Yes, we hit the tarmac at just the time my Croatian Airways plane was scheduled to depart. The flight attendants had kindly let me move up to a crew seat at the front of the plane so I could make a mad dash and perhaps still make it…but alas, the departure gate was deserted (why is that flights never leave late when you actually want them to?) As I expected, the airlines were of no help: their only advice was to travel on a single ticket the next time (gee, thanks).

After a moment of feeling a bit lost and wishing that the whole situation would somehow just go away, I summoned my inner travel smarts. Fast, free internet and a secure VPN connection* enabled me to jump online to research my options, and within twenty minutes I had found a ticket consolidator with a last-minute £150 fare for a connection through Amsterdam that was leaving in an hour. I was dismayed when my new ticket didn’t immediately pop up in my inbox and felt panic creep in as I read the fine print that it might take up to 24 hours to come. There was a toll-free number, however, and as luck would have it I was sitting in front of a good old-fashioned phone booth. I called the company, got a rush order issued, and had my ticket in five minutes. I wrote my Airbnb host to let her know my new arrival time (I had already alerted her to the situation before I left the States), and she promptly replied that my delay would not be a problem. A leisurely jaunt to my third Heathrow terminal of the day and I was on my way Croatia. I ultimately made it to my flat in the early evening, about five hours later than planned.

The whole ordeal was definitely a bit of a hassle. It was also led to an extra expense. However, I have subsequently realized that it really wasn’t a problem. It so happened that I was able to find a pretty immediate alternative way to get to my destination – but even if I hadn’t, nothing truly bad would have happened. I would have probably headed to a hotel to regroup and figure out my next move. Fortunately, I have a passport that would allow me to do that (the UK requires many visitors to have visas) and a credit card to cover unforeseen expenses. Moreover, I had no pressing need to be anywhere or do anything. It could have even turned out to be enjoyable; I haven’t spent time in London for years, and it could have been a good excuse for a mini urban adventure. As I only had my carry-on backpack, I didn’t even have to worry about checked baggage going astray. Finally, any bother I had to go through was very short-lived. I didn’t have to go to therapy or up recreating The Terminal and living at Heathrow. Whatever “pain” I experienced was gone in a day or two, to be replaced only by a travel story (and now this blog post). It was just a fleeting blip of a situation with no real long-term repercussions.

So these days when I feel myself start to get worked up over something, I remind myself of this experience. I then stop and assess if it’s actually a problem or more of an inconvenience – and try to react accordingly. It’s helped me to keep calm and cool when dealing with countless other issues that I’ve faced on the road and become a strategy that I’m fond of advocating. Bottom line, rather than squander our internal resources on things that really don’t merit them, isn’t it better to save them for the times when we truly need them? Anything else seems inefficient and just plain dumb to me.

Kind of like flying on two separate tickets, if you want my opinion. 🙂

2 thoughts on “When problems aren’t problems”